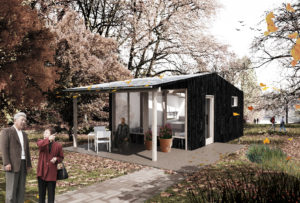 Dr. Thomas described his vision for age friendly communities in an op-ed published in the Missoulian:

Innovations in community response to aging

More than 60 years after the U.S. Supreme Court outlawed racial segregation in “Brown vs. Board of Education,” America’s elders are forced to contend with the widespread practice of segregation by age and ability. One study found that 30 percent of people would rather die than find themselves living in facilities that include only the old and disabled.

Sometimes elders self-segregate voluntarily; more often they lose their independence against their will. In all cases, segregation erodes the fabric that holds our communities together.

I’m a geriatrician, a physician who cares for older people. I’m also a self-proclaimed “nursing home abolitionist” who has long argued that segregation is the problem, not the solution to aging. My nursing home alternative, the Green House Project, has been replicated in 30 states and I’m working on a new innovation — Minka Homes and Communities — I hope will have an even bigger impact.

We are pioneering a new (and very old) way of living. We call this new approach MAGIC. MAGIC stands for: Multi-Ability, multiGenerational, Inclusive Community.

The goal is to create new housing and caregiving options that bring together people of different ages, with different abilities and from different backgrounds. I believe the MAGIC approach can lead to innovations that can help close the two most critical gaps that threaten adult adult’s independence: inadequate housing options and unaffordable care.

Minka is my answer to housing insecurity. Universally designed and digitally native, Minka homes are produced using computer-controlled CNC robots and assembled on site in a few days rather than the typical months to construct a home.

The first Minkas were built near my home in Ithaca, New York, and will next be produced in Evansville, Indiana, as part of a pilot project with the University of Southern Indiana and AARP. We aim to bring Minka Homes to Montana next.

Second, the MAGIC model seeks to reduce the burden of unaffordable care and maximize the independence and well-being of older adults.

The problem with home care today is that any given neighborhood has dozens of customers paying dozens of home care aids to hang out for three to four hours when they often only need help for a few minutes a couple times per day.

What if we could create a MAGIC Network that could deliver just the right amount of care, just when you need it? What if we could nearly double home care wages and reduce the cost to customers?

Harvest has designed just such a network that works like the ride-sharing platform Uber by allowing elders to request a visit as brief as 15 minutes. They don’t even need a smartphone to participate, thanks to emerging voice-activated and Internet-of-Things technologies like the Amazon Echo and Dash Button, which we’ve programmed to work with the MAGIC Network.

Minka homes and the MAGIC Network will only succeed in increasing independence if communities embrace the principles of MAGIC. We will challenge segregation by age and ability (for young and old alike) by bringing to life numerous innovations to support what will hopefully be many MAGIC communities spread across the nation.